"Voices of velvet and steel..." 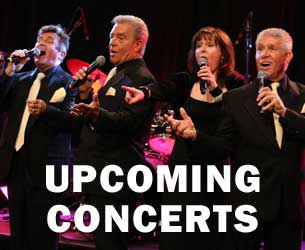 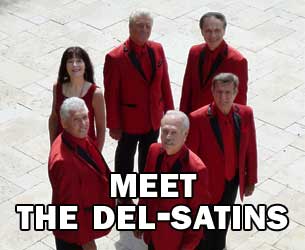 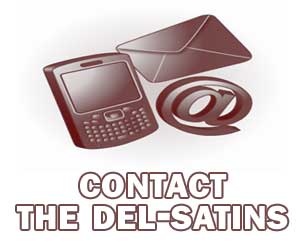 What started as a casual, low-profile meeting of old friends has turned into an internet sensation.  On July 5, a day after performing at the Carole & Barry Kaye Auditorium at FAU in Boca Raton, the Del-Satins were relaxing at the Wyndham Hotel’s TrendTea lounge, awaiting a visit from their old friend Dion.  Now, this old friend just happens to be a rock and roll legend, credited with being a major influence on John Lennon, Bruce Springsteen and Billy Joel, among countless others.  The connection goes back to the early sixties when the Del-Satins provided the background vocals on almost all of Dion’s early mega-hit albums and singles.  But despite the close association, Dion and the Del-Satins have rarely appeared live together.

So, when, during the course of casual conversation, Dion pulled out his iPhone, switched on the video-recorder, propped up the device on an adjacent table and spontaneously broke into song, a small crowd began to form.  Dion posted the resulting video, a rousing rendition of his 1963 chart-topper “Ruby Baby”, on his Facebook page later that day.  What followed is nothing short of staggering.

Within a week, close to 200,000 people had seen the video.  Over a thousand had commented, over three thousand “liked” the video and close to two thousand had shared, or re-posted, the video on their own Facebook timelines.  (To put the Facebook metrics into perspective, a recent post by Dion showing him on stage at Madison Square Garden, backed by James Taylor, Billy Joel, Paul Simon, Bruce Springsteen and Lou Reed, garnered only 97 comments as of this printing.)  However, public reunions have only happened a handful of times since the records were cut over 50 years ago.

A little over a year ago, Dion called the Del-Satins up from the audience at indie-music-mecca Joe’s Pub in New York City.  Prior to that, they had not shared the stage in over 20 years.

Still, the “Wyndham recordings” (Dion has since posted a similar video of “The Wanderer” from the meeting) sparked a flurry of comments from fans asking for a public reunion.  Interestingly, the Del-Satins never toured with Dion in the sixties.  ”We were hired to do the background vocals and we were more concerned at the time with our own career.”  Dion loved the sound that the Del-Satins brought to his records and even took the group with him when he signed with Columbia Records at the height of his success.  However, the closest the group came was the harmony classic “Teardrops Follow Me” that was a local hit in the northeast in 1962.

Today, the Del-Satins feature all three of the living original members from those hit recordings and perform their high-energy show at theaters and performing arts centers up and down the east coast.  Stay tuned…